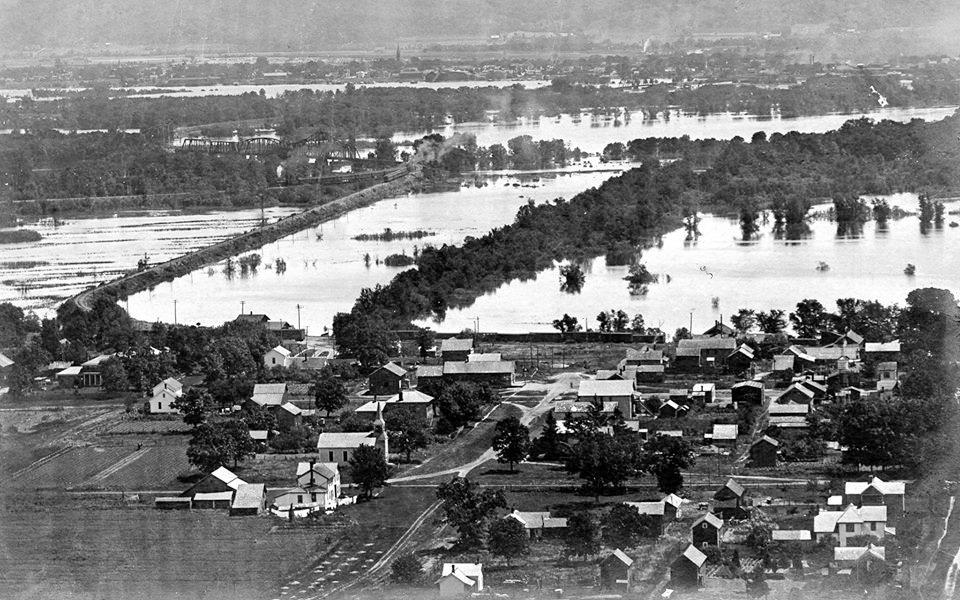 La Crescent was founded before Minnesota was even a state, but the plateau of the city was sculpted over 10,000 years ago by glaciers that left ridges of limestone hills and a sprawling Mississippi River below.  The stunning physical scenery is as much a part of the local history as the people who shaped the community’s early years.
History of Houston County, published in 1919, describes La Crescent:

“situated somewhat back from the Mississippi, from which it is separated by a series of sloughs, marshes and lagoons which teem in luxuriant water foliage and flowering plants, and occupying the gently sloping terraces which terminate on the sunny slopes of picturesque hills, the village is free from floods, and still has all the advantages that can be given by nearness to that great thoroughfare.”

The Hopewell and Oneota people were the first civilizations and the area’s first farmers; however, the Oneota moved away in 1685 when explorers came through.  About 85 earthen mounds, remnants of a large village, once existed just west of the Hwy 16-61-14 intersection. 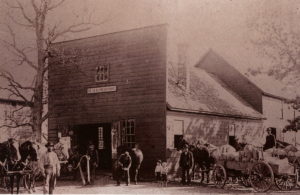 Peter Cameron is credited as founding La Crescent in 1851.  He and his wife, Emma, are two of the most colorful people in La Crescent’s history.  They originally settled in La Crosse, Wisconsin, across the Mississippi River and had the first wedding in La Crosse in 1846.  Peter then became the fourth of Emma’s nine husbands.

Cameron was a successful businessman with vast land holdings in La Crosse and La Crescent for his lumber business. La Crescent, unlike La Crosse, had no natural port on the Mississippi, which made the town slow to settle since people had to ferry over. Cameron tried to remedy the situation by digging a canal over to La Crescent intending to change the course of the Mississippi so it would go past La Crescent instead of La Crosse.  Sadly, he died ten weeks short of its scheduled completion. The canal was never finished, but maps of that era show the canal.

La Crescent, originally called “Camerons” after Peter Cameron, was renamed “Manton” a few years later by the Gillett brothers, William and Harvey, to whom Cameron had given the downtown land if they would clear it and plat a town. A few years later, land speculators from Kentucky—the Kentucky Land Company—bought the Manton land and built 12 of the original houses in the town. Thinking they needed a more romantic sounding name to entice settlers to come here, they renamed the town “La Crescent.” The reasons for the name were not recorded, but locals believe the name symbolizes the crescent shape of the bluffs around the town and the bend of the Mississippi River around it. 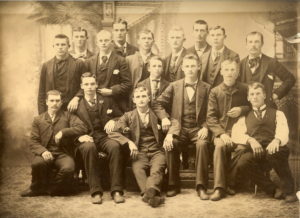 John S. Harris, Minnesota’s first successful apple grower, moved to La Crescent in 1856. He settled near the base of what is now Apple Blossom Drive as it heads up the bluffs from La Crescent. There he planted his first apple trees in 1857, the year that La Crescent was incorporated.

In the 1850s, people thought it was impossible to grow apples in the cold of Minnesota, but Harris developed trees that were hardy enough to withstand the severe winters.  He collaborated with the University of Minnesota on cultivating apple varieties and was the founder of the Minnesota Apple Growers Association.

By the late 1800s, people came by stage, riverboat, and wagon.  Settlers cleared and developed timbered land, and some followed Harris’ success by starting their own fruit farms.  The city blossomed with several businesses, including a grocery, general store, hotel, and blacksmith shop, as well as churches and a school.  The stone school pictured below was built in 1870 and razed in 1900. 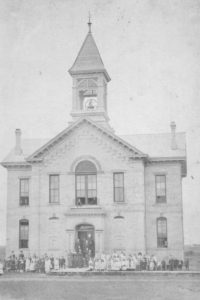 Houses began to dot the grid of dirt streets.  One of those houses, built in 1871, is today listed on the National Register of Historic Places (see photo below)

Cameron house on the National Register of Historic Places

The Italianate house, now a private residence on South 7th Street, was the home of Daniel Cameron, Peter Cameron’s brother.